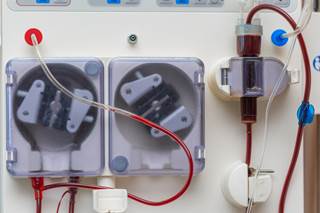 In a cohort study of 1213 patients treated with continuous RRT, the 90-day mortality rate was 53.6% among the 621 patients (51.2%) who received early RRT (RRT initiation at AKI stage 2 or below) compared with 46% among the 592 patients (48.8%) who received late RRT (RRT initiation at AKI stage 3). Early RRT was associated with a statistically significant 24% increased risk of 90-day mortality compared with late RRT, Søren Christiansen, MD, of Aarhus University Hospital in Aarhus N, Denmark, and colleagues reported.

The 90-day to 5-year mortality rates were 37.7% and 41.5% in the early and late RRT groups, respectively. The 5-year rates of chronic kidney disease (CKD) and end-stage renal disease (ESRD) were 35.9% and 13.3%, respectively, in the early RRT group and 44.9% and 16.7% in the late RRT group. None of these differences in long-term outcomes were statistically significant.

Noting that the optimal time to initiate RRT for AKI remains unclear, the authors said there “is a theoretical rationale for early initiation of RRT, such as improved control of fluid balance, electrolytes, and acid-base status,” the investigators wrote. With earlier initiation, however, patients who might have recovered without RRT would be exposed to the risks associated with RRT and treatment-related complications.

Previous meta-analyses of primarily observational studies have found early RRT initiation to be associated with decreased short-term mortality compared with late RRT initiation, but the most of the included studies had methodological limitations, such as small sample sizes or inadequate control of confounders, the authors wrote.

Dr Christiansen's team said that, to their knowledge, only 2 observational studies have evaluated mortality beyond 90 days, and none have examined the impact of timing of RRT on CKD and ESRD risk.