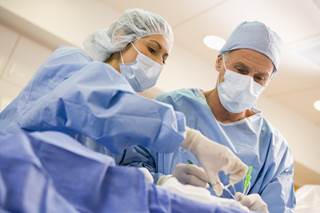 Among patients treated with targeted therapy, overall survival was 17.1 months for CN recipients vs 7.7 months for those without CN.

Recent reports show declining use of CN in the TT era. So a team led by Nawar Hanna, MD, of Brigham and Women's Hospital in Boston, used the 2006–2013 data from National Cancer Data Base to compare overall survival in 12,995 mRCC patients taking TT, based on who did and did not receive CN. They also looked at predictors of CN using an all-inclusive group of 15,390 patients.

Results showed that 3 out of 10 patients with mRCC treated with TT undergo CN. After analysis, the investigators determined that patients having CN tended to be younger, obtain care at an academic center, and have lower Charlson Comorbidity Index scores. Their cancers were more likely to be a lower primary tumor stage and without lymph node involvement.

Important questions still need to be answered with future research, he added, including what the ideal timing of CN is in relation to TT and how newly introduced immunotherapy will be incorporated.