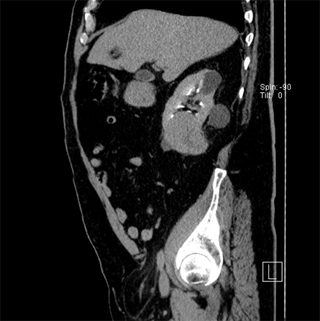 The document spells out in greater detail the criteria for radical and partial nephrectomy and for placing patients on active surveillance.

BOSTON—Updated guidelines for the evaluation and management of renal masses released by the American Urological Association (AUA) at its 2017 annual meeting provide clinicians with more clearly defined criteria for the use of radical and partial nephrectomy, and active surveillance. The guidelines also now advocate the use of thermal ablation in selected cases, particularly for small tumors.

The guidelines recommend that radical nephrectomy be considered for patients who opt for active treatment and who have a solid or Bosniak 3/4 complex cystic renal mass in which tumor size, renal mass biopsy, and/or imaging characteristics suggest increased oncologic potential. In such patients, radical nephrectomy is preferred if all of the following criteria are met: high tumor complexity and partial nephrectomy would be challenging even in experienced hands; the patient has no preexisting chronic kidney disease (CKD) or proteinuria; and the patient has a normal contralateral kidney and new baseline estimated glomerular filtration rate (eGFR) will likely be greater than 45 mL/min/1.73 m2.

Partial nephrectomy should be prioritized for the management of cT1a renal masses when intervention is indicated, the guidelines state. In these cases, partial nephrectomy minimizes the risk of CKD or CKD progression and is associated with favorable oncologic outcomes. In addition, nephron-sparing approaches should be prioritized for patients with an anatomic or functionally solitary kidney, bilateral tumors, known family history of renal cell carcinoma, and preexisting CKD, or proteinuria. Partial nephrectomy should also be considered for patients who are young, have multifocal masses, or comorbidities that are likely to impact renal function in the future, such as diabetes, morbid obesity, moderate to severe hypertention, diabetes, and recurrent urolithiasis.

Regarding thermal ablation, the guidelines state that physicians should be consider this modality as an alternative approach in the management of cT1a renal masses smaller than 3 cm. For patients who opt for this treatment, a percutaneous technique is preferred over a surgical approach when feasible to minimize morbidity.

Active surveillance should be considered for patients who have suspicious renal masses, especially those smaller than 2 cm. For patients with these masses, “physicians should prioritize active surveillance/expectant management when the anticipated risk of intervention or competing risks of death outweigh the potential oncologic benefits of active treatment,” the guidelines state.

For patients with a solid or Bosniak 3/4 complex cystic renal mass in whom the risk/benefit analysis for treatment is equivocal and who prefer AS, physicians should repeat imaging in 3-6 months to assess for interval growth and may consider renal mass biopsy for additional risk stratification.

The guidelines also include an expanded section on patient counseling. “Physicians should provide counseling that includes current perspectives about tumor biology and a patient-specific risk assessment inclusive of sex, tumor size/complexity, histology (when obtained), and imaging characteristics.”  According to the guidelines, physicians should recommend genetic counseling for all patients aged 46 years or younger with renal malignancy and consider genetic counseling for patients with multifocal or bilateral renal masses, or if personal or family history suggests a familial renal neoplastic syndrome.

In an important departure from the previous guidelines released in 2009, the panel abandoned the use of index patients. The previous guidelines were framed on 4 different index patients (healthy vs unhealthy and those with T1a vs T1b disease). “This time around that panel felt very strongly that there was so much variance and heterogeneity in the clinical characteristics of patient health, co-morbidities, functional issues, and oncologic issues, and that there were so many gray zones that the  new guidelines do  not use index patients,” Dr Campbell told Renal & Urology News. “Rather, the panel advocates for more individualized patient evaluation and management.”

The new guidelines also have a greater focus on the functional implications of each management strategy “with the recognition that patients with localized kidney cancer typically do not die of cancer and their functional outcomes are a critically important part of their cancer survivorship as they move on with the rest of their lives,” he said. Toward this end, the guidelines provide recommendations about who should be referred to a nephrologist and the use of CKD staging before management. Such patients may include those with an eGFR less than 45 mL/min/1.73 m2, confirmed proteinuria, diabetics with preexisting CKD, or whenever eGFR is expected to be less than 30 mL/min/1.73 m2 after intervention.

View the guidelines at: http://auanet.org/guidelines/renal-mass-and-localized-renal-cancer-new-(2017)