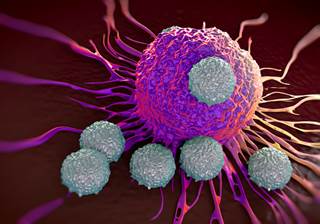 In a study of mRCC patients who received targeted therapy (TT) following cytoreductive nephrectomy, mortality risk did not differ significantly between delayed and early TT.

In a retrospective observational study that included 2716 patients with mRCC treated with both cytoreductive nephrectomy and TT, Solomon Woldu, MD, of the University of Texas Southwestern Medical Center in Dallas, and colleagues found that the risk of death among patients with moderately delayed, delayed, and late TT did not differ significantly from patients who had early TT. The investigators defined TT delivered within 2 months of mRCC diagnosis as early (1255 patients, 46.2%). They considered TT delivered in 2 to 4 months, 4 to 6 months, and more than 6 months to be moderately delayed (1072 patients, 39.5%), delayed 284 patients, 10.5%), and late (105 patients, 3.9%), respectively. The median time from mRCC diagnosis to initiation of TT was 2.1 months.

Although TT is the first-line option for mRCC, the authors noted, it is not curative and it is associated with high cost and adverse effects.

The investigators acknowledged that their study is limited by the study design and potential selection bias, but noted that the findings are consistent with the idea that, among carefully selected patients, initial observation might not compromise outcomes.