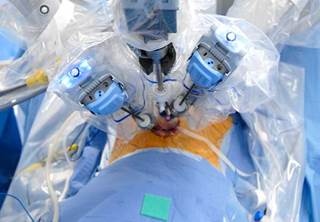 In 2015, 69% of surgeries for prostate, bladder, and kidney cancer were performed with robotic assistance, a new meta-analysis shows.

SAN FRANCISCO—Most surgeries for urologic cancers in the United States today are performed with robotic assistance, according to the first meta-analysis looking at overall trends in the use of robotics in urologic oncology.

Robotic surgeries are associated with less blood loss, fewer perioperative complications, and shorter hospital length of stay compared with open surgery, but it costs more than open surgery and takes longer to perform, the meta-analysis showed.

Of 105,300 prostate, bladder, and kidney cancer surgeries performed in 2005, robotics were used in 29.6% of cases. This proportion increased to 69.2% of 88,198 surgeries in 2015, Inderbir Gill, MD, and Giovanni Cacciamani, MD, of the University of Southern California Keck School of Medicine in Los Angeles, reported.

Of all patients undergoing radical prostatectomy (RP), radical cystectomy (RC), and partial nephrectomy (PN) in 2015, surgeons used robotic assistance in 85.4%, 32.8%, and 66.1% of cases, respectively. These data show that use of robotic surgery increased 4-, 11- and 110-fold for RP, RC, and PN, respectively, compared with 2005, according to Drs Gill and Cacciamani.

Contemporary outcomes of robotic-assisted RP, RC, and PN surgery are now at a minimum equal, but mostly superior, to open surgery, except for operative time and costs, the investigators concluded.

“The findings are supportive of robotic vs open surgery similar to the individual studies that serve as the underpinnings, but one must consider publication bias,” said Jim C. Hu, MD, MPH, Director of the LeFrak Center for Robotic Surgery at Weill Cornell Medicine and New York-Presbyterian in New York. “These are meta-analyses of published studies. The question remains whether these findings are representative of community and academic centers that do not publish results. For instance, 30% of robotic utilization in 2005 is higher than population-based studies using insurance claims and industry estimates.”

The findings may be biased toward academic centers as early adopters of technology, particularly to be able to offer it to patients or because they have modern training platforms for surgeons to become skilled in using the latest technology, he added. “Regardless, it is a laborious and noteworthy study that demonstrates that the arrow is striking close to the bull's-eye, for early robotic surgery adopters and those beyond the learning curve.”

The meta-analysis shows that robotic surgery “now should be considered the standard in many aspects of oncologic surgery,” said Douglas M. Dahl, MD, Chief of the Division of Urologic Surgery at Massachusetts General Hospital in Boston. “It's become standard of care, I think, in radical prostatectomy, and becoming very much the standard of care in partial nephrectomy as well. In cystectomy, there's still a lot of debate as to whether or not that's ultimately going to prove most useful.”

He emphasized the benefit to patients. “The really neat experience with minimally invasive [robotic] surgery is that patients can go through these very complex operations and recover very quickly,” Dr Dahl told Renal & Urology News. “It avoids a lot of the long-term disability of recovering from, say, an open kidney operation.”

Robotics enables surgeons to perform dissections more precisely, which gives them greater control in removing tissue and cuts down on bleeding, he said. Robotics also can make operations less physically demanding compared with open surgery. “Surgery can be a very athletic endeavor,” Dr Dahl said. “Often I feel less fatigued at the end of the day after doing robotic cases versus open surgery.”

Based on the meta-analysis, robotic surgery costs more and takes longer than open surgery, “which are important resource issues for the hospitals and medical system,” he said.

According to Dr Dahl, it is important that robotics win “comprehensive acceptance” in the health care system such that efforts are made to improve training and establish standards in robotic surgery and to increase the cost effectiveness and decrease the surgical time compared with open surgery.

Gill I, Cacciamani G. The changing face of urologic oncologic surgery from 2000 – 2018 (63,141 patients)-Impact of robotics. Presented at the 2018 American Urological Association annual meeting in San Francisco, May 18–21. Abstract LBA3.