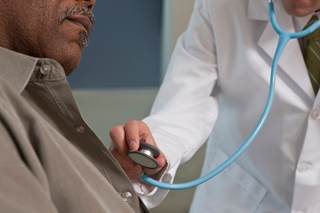 SAN FRANCISCO—Black patients with renal cell carcinoma (RCC) have shorter life spans than whites because of socioeconomic factors and not worse prognosis, Harry Anastos, MD, of the Icahn School of Medicine at Mount Sinai in New York, and his colleagues reported at the American Urological Association 2018 annual meeting.

The team compared socioeconomic, clinical, and treatment characteristics between 8747 black and 70,422 white patients with RCC from the National Cancer Data Base. Black patients generally presented with favorable disease. They were significantly younger (60.2 vs 62.5 years), had lower-stage cancer (12% vs 18.8% had stage 3 to 4 RCC), and were more likely to have papillary RCC (42.8% vs 15.2%). Yet, black patients also had significantly higher Charlson comorbidity scores (11% vs 8% had a score of 2), longer delays from diagnosis to treatment (2.1 vs 1.6 months), and lower likelihood of cytoreductive radical nephrectomy. They also tended to have lower incomes (40% vs 14% had annual income less than $38,000) and less education. Compared with white patients, blacks showed significantly worse overall survival (OS) in multivariable Cox proportion hazards regression models examining presentation and treatment.

"In our study, black patients with kidney cancer presented younger and at an earlier stage compared with white patients,” co-author Ketan Badani, MD, told Renal & Urology News. “These characteristics should have resulted in more favorable outcomes. However, we still saw a worse survival rate in blacks, which suggests a strong socioeconomic impact over tumor biology to explain this racial disparity.”