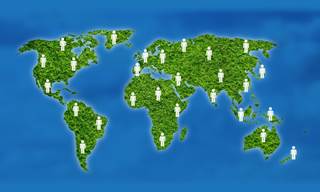 Kidney disease is a global public health problem, affecting over 750 million persons worldwide.1,2 The burden of kidney disease varies substantially across the world, as does its detection and treatment. In many settings, rates of kidney disease and the provision of its care are defined by socio-economic, cultural and political factors leading to significant disparities.3 World Kidney Day 2019 offers an opportunity to raise awareness of kidney disease and highlight disparities in its burden and current state of global capacity for prevention and management. Here, we highlight these disparities and emphasize the role of public policies and organizational structures in addressing them.

In addition to a need for functional surveillance systems, the global importance of kidney disease is yet to be widely acknowledged. For instance, the World Health Organization (WHO) Global Action Plan for the Prevention and Control of Non-Communicable Diseases (NCDs) (2013)6 focuses on cardiovascular diseases, cancer, chronic respiratory diseases, and diabetes, but not kidney disease. This is quite concerning as estimates from the Global Burden of Disease study in 2015 showed that around 1.2 million people were known to have died of CKD,7 and over 2 million people died in 2010 because they had no access to dialysis. It is estimated that another 1.7 million die from acute kidney injury (AKI) on an annual basis.8,9 It is possible, therefore, that kidney disease may contribute to more deaths than the four main NCDs targeted by the current NCD Action Plan.

Due to the complex and costly nature of kidney disease care, its provision is tightly linked with the public policies and financial status of individual countries. In several high-income countries, universal health care is provided by the government and includes CKD and ESRD care. In others, such as the United States, ESRD care is publically financed for citizens, however, optimal treatment of CKD and its risk factors may not be accessible for persons lacking health insurance, and regular care of undocumented immigrants with kidney disease is not covered. In low- and lower-middle-income countries, neither CKD nor ESRD care may be publically financed and CKD prevention efforts are often limited. In several such countries, collaborations between public and private sectors have emerged to provide funding for RRT.10

In many settings, individuals with advanced CKD shoulder substantial financial burden. A systematic review of 260 studies including patients from 30 countries identified significant challenges including: fragmented care of indeterminate duration, reliance on emergency care, and fear of catastrophic life events because of diminished financial capacity to withstand them.11 Challenges may be even greater for families of children with ESRD, as many regions lack qualified pediatric care centers.

The lack of recognition and therefore absence of a global action plan for kidney disease partly explains the substantial variation in structures and capacity for kidney care around the globe. In 2017, the International Society of Nephrology collected data on country-level capacity for kidney care delivery using a survey, the Global Kidney Health Atlas (GKHA),4 which aligned with the WHO's building blocks of a health system.13 The GKHA highlights limited awareness of kidney disease and its consequences and persistent inequities in resources required to tackle the burden of kidney disease across the globe. For example, CKD was recognized as a health care priority by government in only 36% of countries that participated in this survey, and priorities were inversely related to income level: CKD was a healthcare priority in more than half of low- and lower-middle-income countries, but in less than 30% of upper-middle- and high-income countries.

On capacity and resources for kidney care, many countries still lack access to basic diagnostics, a trained nephrology workforce, universal access to primary health care, and RRT. Low- and lower-middle-income countries, especially in Africa, had limited services for the diagnosis, management, and monitoring of CKD at the primary care level, with only 12% having serum creatinine measurement including estimated glomerular filtration rate. Across all world countries, availability of services at the secondary/tertiary care level was considerably higher than at the primary care level.

How could this information be used to mitigate existing barriers to kidney care? First, basic infrastructure for services must be strengthened at the primary care level for early detection and management of AKI and CKD across all countries.18 Second, whilst optimal kidney care should obviously emphasize prevention to reduce adverse consequences of kidney disease at the population level, countries (particularly low- and lower-middle-income countries) should be supported at the same time to adopt more pragmatic approaches in providing RRT. For example, acute peritoneal dialysis could be an attractive modality for AKI, as this is as effective as hemodialysis, requires far less infrastructure, and can be performed with solutions and catheters adapted to local resources.19,20 Third, kidney transplantation should be encouraged through increased awareness among the public and political leaders across countries, as this is the clinically optimal modality of RRT and it is also cost-effective, provided that costs of the surgery and long-term medication and follow-up are made sustainable through public (and/or private) funding.21

Socially disadvantaged individuals experience a disproportionate burden of kidney disease worldwide. The provision of and delivery of kidney care varies widely across the world. Achieving universal health coverage worldwide by 2030 is one of the WHO Sustainable Development Goals.22 While universal health coverage may not include all elements of kidney care in all countries, understanding what is feasible and important for a country or region with a focus on reducing the burden and consequences of kidney disease would be an important step towards achieving kidney health equity.

This article was published in Kidney International volume 95, pages 242-248, and reprinted concurrently in other journals. The articles cover identical concepts and wording, but vary in minor stylistic and spelling changes, detail, and length of manuscript in keeping with each journal's style. Any of these versions may be used in citing this article.