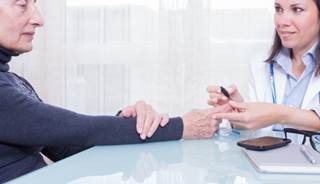 (HealthDay News) -- Cancer development is associated with increased risk of subsequent type 2 diabetes mellitus, according to a study published online in JAMA Oncology.

Yul Hwangbo, MD, from the National Cancer Center in Goyang, South Korea, and colleagues examined whether development of cancer is associated with an increased risk of subsequent diabetes in a nationally representative sample of the Korean population. A total of 494,189 men and women aged 20 to 70 years without diabetes and with no history of cancer were followed for a median of 7 years.

The researchers found that 15,130 participants developed cancer and 26,610 developed diabetes during follow-up. The hazard ratio for diabetes associated with cancer development was 1.35 after adjustment for age, sex, precancer diabetes risk factors, metabolic factors, and comorbidities. In the first 2 years after cancer diagnosis, the excess risk for diabetes was highest, and it remained elevated throughout follow-up. Significantly increased risks of diabetes were seen for development of pancreatic, kidney, liver, gallbladder, lung, blood, breast, stomach, and thyroid cancer (hazard ratios, 5.15, 2.06, 1.95, 1.79, 1.74, 1.61, 1.60, 1.35, and 1.33, respectively).

"Physicians should remember that patients with cancer develop other clinical problems, such as diabetes, with higher frequency than individuals without cancer, and should consider routine diabetes screening in these patients," the authors write.