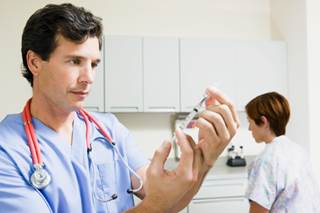 A 2-drug combination may offer a better treatment options for patients with untreated mRCC.

Combined treatment with atezolizumab and bevacizumab for untreated metastatic renal cell carcinoma (mRCC) reduces the likelihood of disease progression better than sunitinib, according to study findings presented at the 2018 Genitourinary Cancers Symposium. The benefit appears to be greater in patients with PD-L1 positive tumors.

The phase III study, which began in 2015, enrolled 915 adult patients with mRCC who were randomly assigned to receive either the immunotherapy atezolizumab plus the targeted therapy bevacizumab intravenously every 3 weeks or sunitinib, an orally administered drug, daily for 4 weeks, followed by 2 weeks off treatment. Atezolizumab is an immune checkpoint inhibitor that blocks the PD-L1 protein on tumor cells, thereby allowing the immune system to recognize and attack those cells. Bevacizumab and sunitinib block vascular endothelial growth factor. Of the 915 patients, 362 had PD-L1 positive tumors.

For an aggressive cancer such as mRCC, where less than 20% of patients survive 5  years after diagnosis, a 3.5-month longer PFS, given the tolerability of the combined regimen, is an important development, according to Dr Motzer.

“The study that Dr Motzer presented represents an important breakthrough in kidney cancer therapy,” said Sumanta K. Pal, MD, an American Society of Clinical Oncology (ASCO) expert who moderated a pre-symposium press conference at which Dr Motzer presented the study's findings. He noted that the combination therapy achieved a higher rate of complete response than sunitinib. “Achieving a complete response … is really the highest bar that we can strive for in this setting,” he said.

The symposium is cosponsored by ASCO, the American Society for Radiation Oncology, and the Society of Urologic Oncology.