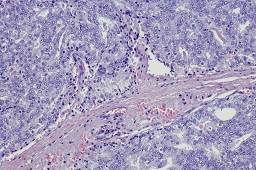 Among men receiving radiation therapy for prostate cancer, the proportion of those receiving brachytherapy dropped from 59.3% to 34.7% from 2004 to 2014, a study found.

In a study of 134,713 men who received brachytherapy or dose-escalated EBRT alone for favorable-risk PCa, Kevin A. Nguyen, MD, of the University of California, Los Angeles, and colleagues found that brachytherapy use declined significantly from 59.3% of cases in 2004 to 34.7% in 2014. Brachytherapy was consistently used more frequently at community centers (63% in 200 and 61% in 2014) than academic centers.

Men with Medicare or private insurance were more than twice as likely as those with Medicaid coverage to receive brachytherapy.

The 10-year overall survival rate was significantly higher for brachytherapy than dose-escalated EBRT (74.5% vs 68.2%).