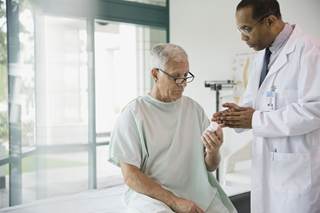 Researchers compared patients with advanced renal cell carcinoma (RCC) treated with cabozantinib to those treated with everolimus and found that cabozantinib-treated patients have a higher rate and greater magnitude of early tumor shrinkage, which is associated with prolonged overall survival (OS), study findings presented at the 2019 Genitourinary Cancers Symposium suggest.1

During an oral presentation, lead investigator Ignacio Durán, MD, PhD, of the Hospital Universitario Marqués de Valdecilla in Spain, told attendees that early tumor shrinkage “at first post-baseline scan may be an early indicator of clinical benefit in patients with advanced kidney cancer who are receiving cabozantinib treatment.”

Dr Durán and colleagues analyzed data from 658 patients with advanced RCC who participated in the phase 3 METEOR trial (ClinicalTrials.gov Identifier: NCT01865747), and found that the proportion of patients who had both a 30% or greater early tumor shrinkage and any early tumor shrinkage was higher with cabozantinib compared with everolimus (20% vs 5% and 73% vs 47%, respectively).

For patients who had 30% or greater early tumor shrinkage, median OS was not reached in cabozantinib-treated patients and was 10.2 months among everolimus recipients. Cabozantinib treatment was associated with a significant 55% decreased risk of death (stratified hazard ratio [HR], 0.45; 95% CI, 0.21-0.95; P <.05).

Median OS time among patients who had any early tumor shrinkage was 23.7 months for cabozantinib-treated patients compared with 17.3 months among everolimus recipients. Cabozantinib was associated with a significant 38% decreased risk of death compared with everolimus (stratified HR, 0.62; 95% CI, 0.48-0.80; P <.05). For patients who did not have early tumor shrinkage, median overall survival was similar between treatment arms.

Dr Duran and collaborators concluded that early tumor shrinkage evident on the first post-baseline scan may be an indicator of clinical benefit of cabozantinib treatment in patients with advanced RCC.

Cabozantinib is an oral inhibitor of tyrosine kinases, and everolimus is a mammalian target of rapamycin inhibitor. In the METEOR trial, investigators randomly assigned 330 patients to receive cabozantinib (60 mg once daily) and 328 to receive everolimus 10 mg once daily). All patients had received prior treatment for advanced RCC. The final results from the trial, which were published in Lancet Oncology, demonstrated that cabozantinib was associated with significantly improved OS, progression-free survival, and objective response compared with everolimus.2 The US Food and Drug Administration approved cabozantinib as a second-line treatment for advanced kidney cancer in April 2016.

In the current analysis, the median follow-up time for OS was 28 months. Dr Durán's team assessed target lesion size using computed tomography and magnetic resonance imaging scans at baseline and every 8 weeks for the first 12 months and every 12 weeks thereafter. The investigators calculated early tumor shrinkage by comparing the sum of diameters of target lesions at the first post-baseline scan at week 8 with baseline measurements.

The median time to objective response was 1.91 months (range: 1.6-11.0 months) with cabozantinib and 2.14 months with everolimus (range: 1.9-9.2 months), and corresponded to the time to the first post-baseline scan, according to Dr Durán and his team.

Disclosures: This study was sponsored by Paris-based Ipsen and the METEOR trial was sponsored by Exelixis, of Alameda, California, which developed cabozantinib. For a complete list of author disclosures please refer to the abstract.