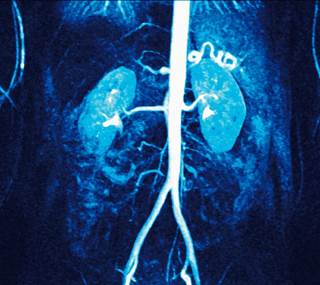 Patients with treatment-naive, intermediate- and poor-risk advanced RCC continue to have superior overall survival with the dual ICI regimen compared with sunitinib alone.

Additional follow-up of the phase 3 CheckMate 214 trial confirms the survival benefit of nivolumab plus ipilimumab over sunitinib as a first-line treatment for patients with intermediate- and poor-risk advanced renal cell carcinoma (RCC), investigators reported at the 2019 Genitourinary Cancers Symposium.1

In the primary analysis, intermediate- and poor-risk patients had a minimum follow-up of 17.5 months. The 18-month overall survival rate was 75% for the nivolumab-ipilimumab group and 60% for sunitinib recipients.2 The nivolumab-ipilimumab group had a significant 37% decreased risk of death compared with the sunitinib-treated patients (P <.001). The objective response rate (ORR) was 42% and 27%, respectively.

For the new analysis, patients had a minimum follow-up of 30 months, Nizar M. Tannir, MD, FACP, of the University of Texas MD Anderson Cancer Center in Houston, and colleagues reported. For patients with intermediate- and poor-risk disease, those who were treated with nivolumab plus ipilimumab had a significant 34% decreased risk of death compared with sunitinib-treated patients (hazard ratio [HR] 0.66; 95% confidence interval [CI], 0.54–0.80]; P <.0001).

This follow-up study found no significant differences in outcomes between the 2 treatment groups among patients with favorable-risk disease.

The longer follow-up did not reveal any new safety concerns, according to the investigators.