Women Less Likely to Initiate Hemodialysis With an AV Fistula 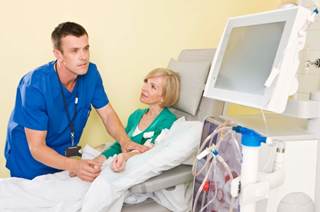 The odds of starting hemodialysis with an arteriovenous fistula are 31% lower for women compared with men.

Despite the “fistula first” campaign, women, especially black women, are less likely than men to initiate hemodialysis (HD) with an arteriovenous fistula (AVF) for vascular access, according to a new study.

The study, based on data from the US Renal Data System (USRDS), included 187,577 HD patients older than 18 years who received predialysis nephrology care and initiated HD from January 1, 2006 to September 30, 2009. In the overall unadjusted cohort, 18.2% of women reported an AVF as initial access for HD compared with 25.8% for men, Mariana Markell, MD, and colleagues at SUNY Downstate School of Medicine in Brooklyn, New York, reported online in Hemodialysis International. The odds of starting HD with an AVF were 31% lower for women overall compared with men; the odds were 34% lower for black women and 30% lower for non-black women.

Dr Markell's team observed a gender gap across all 18 end stage renal disease (ESRD) networks, with AVF use ranging 20% to 46% lower for women. New York and the upper Midwest exhibited the greatest disparities, and Southern California, the Pacific Northwest, and Alaska, the least. According to the investigators, international data from DOPPS (Dialysis Outcomes and Practice Patterns Study) 1996–2012 also has shown lower prevalence of AVF use in women.

“Gender disparities have long been overlooked in the nephrology community for unclear reasons,” Dr Markell told Renal & Urology News. “Our finding that marked geographic variation exists in the gender disparity regarding use of fistula on initiation of hemodialysis is concerning on several levels.”

AVF is the preferred vascular access for HD due to its lower rate of infection, lower risk of complications and thrombosis, and reduced costs compared with arteriovenous graft and tunneled catheter. Women are purported to have smaller vessel diameter, but some studies suggest that the overall difference in vessel size between men and women is not significant. Other studies the investigators cited point to more vascular access-related procedures, worse AVF maturation, or more salvage operations among women.

“It is hard to explain the observed geographic variations in fistula placement, if vessel size alone were the ultimate arbiter of fistula placement,” Dr Markell said. “The presence of marked geographic differences in gender disparity suggests that some aspect of bias, either on the part of [the] referring physician, patient, or surgeon may be playing a role, or surgical technique issues, referral patterns or transition to care factors may be contributing.”

She speculated that chronic kidney disease severity may be recognized later in women due to the use of estimated glomerular filtration rate formulas based on lower muscle mass. Surgical bias regarding AVF maturation ability in women versus men is another possible factor.

“Certainly, further studies should be done at the local region levels to elucidate factors that are preventing women from starting dialysis with a fistula, in order to improve rates,” Dr Markell said.

To minimize bias due to lack of access to care, the team only studied patients receiving pre-dialysis nephrology care. In their multiple logistic regression analyses, they also controlled for important confounders, including age, race, cause of ESRD, body mass index, height, history of alcohol or drug abuse, comorbidities, ambulation, time of nephrology care, insurance type, and ESRD network. The URSDS does not provide data on nonfunctional AVF, and may underreport certain comorbid conditions, the authors noted.