Hypogonadal Symptoms in Younger Men May Begin at Higher Threshold

Among men younger than age 40, a total testosterone level of less than 400 ng/dL was linked with hypogonadal symptoms. 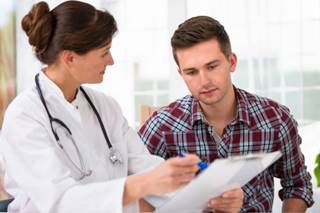 Lack of energy appeared to be the most important symptom of hypogonadism in young men.

Many men younger than 40 years with testosterone levels of 300 – 400 ng/dL still experience hypogonadal symptoms, a new study suggests. The standard threshold of below 300 ng/dL, based on studies in elderly men, may not apply to younger men.

“The notion that common and uniform concentrations of androgen levels can be applied to describe the increasing prevalence of testosterone-related symptoms in young men should be challenged on the basis of the conclusions from the present study,” stated lead researcher Larry I. Lipshultz, MD, of Baylor College of Medicine in Houston, and colleagues.

The investigators suggest a 400 mg/dL threshold can be used along with symptoms and a comprehensive general assessment to determine the underlying health problems in young male patients. It should not be used as the sole criterion to start testosterone replacement therapy.

For the study, they reviewed the charts of 352 men younger than age 40 who complained of “low testosterone” while attending an outpatient clinic in 2013 – 2014. Serum total testosterone levels were collected and analyzed. Patient responses to the Androgen Deficiency in Aging Male (ADAM) questionnaire about sexual, psychological, and physical symptoms were also assessed. Despite poor specificity, the 10-question ADAM questionnaire is validated for hypogonadism.

According to results published  online ahead of print in BJU International, the probability of hypogonadal symptoms increased at a total testosterone level of 400 ng/dL for young men. None of the 10 symptoms predicted a testosterone level below 300 ng/dL.

Sexual symptoms, such as erectile dysfunction (ED), often seen in elderly men, did not predict hypogonadism in these younger patients. Instead, low energy and sadness, along with decreased strength, lowered ability to play sports, and decline in work performance were associated with low testosterone. After multivariable analysis, lack of energy appeared to be the most important symptom.

“Young men are less likely to have organic factors contributing to ED, and our present data suggests that sexual symptoms often seen in elderly hypogonadal men are less important in diagnosing clinical hypogonadism in younger men,” according to the researchers.