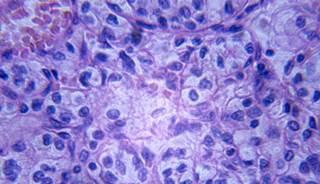 Avelumab plus axitinib is associated with longer progression-free survival compared with sunitinib as first-line therapy in patients with advanced renal cell carcinoma.

Avelumab plus axitinib combination therapy is associated with better outcomes compared with sunitinib alone as first-line treatment of advanced renal cell carcinoma (RCC), according to study findings presented at the European Society for Medical Oncology 2018 Congress in Munich, Germany.

In the randomized JAVELIN phase 3 trial that included patients with advanced RCC who had no prior systematic therapy, the median progression-free survival (PFS) irrespective of PD-L1 status was 13.8 months among recipients of the dual regimen compared with 8.4 months in the sunitinib arm, Robert J. Motzer, MD, of Memorial Sloan-Kettering Cancer in New York, and colleagues reported. Among patients with PD-L1+ tumors, median PFS was 13.1 years in the dual-therapy arm compared with 7.2 months among sunitinib recipients.

Compared with sunitinib therapy, the combination regimen was associated with a significant 39% decreased risk of disease progression in the overall cohort and 31% decreased risk among patients with PD-L1+ tumors.

The objective response (OR) rate was significantly higher for recipients of the avelumab-axitinib regardless of PD-L1 status (51.4% vs 25.7%) and among patients with PD-L1+ tumors (55.2% vs 25.5%), according to the investigators.

Dr Motzer's team said they observed the PFS and OR benefit across all prognostic risk groups.

As of June 20, investigators had randomly assigned 886 patients: 442 to the avelumab-axitinib group and 444 to the sunitinib group. Based on IMDC (International Metastatic Renal Cell Carcinoma Data Consortium) criteria, 21%, 62%, and 16% had favorable-, intermediate-, and poor-risk disease, respectively. For fewer than 1% of patients, no IMDC risk group was reported.

The authors concluded that their findings support avelumab plus axitinib as a potential new first-line standard of care for patients with advanced RCC.