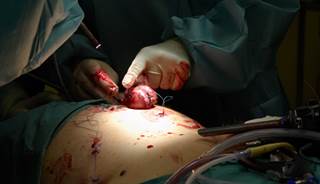 In a study, the off-clamp approach to partial nephrectomy also was associated with lower risk for acute kidney injury.

For patients with small renal tumors, partial nephrectomy (PN) performed off-clamp instead of on-clamp better protects renal function after surgery, according to a new systematic review and meta-analysis in BMC Nephrology.

Pooled results from 25 cohort studies showed that the decline in estimated glomerular filtration rate (eGFR) in the 3 months after surgery was 4.8 mL/min/1.73 m2 less among off-clamp than on-clamp patients, Bin Fu, MD, of First Affiliated Hospital of Nanchang University in China, and colleagues reported. Further, on-clamp patients experienced a lesser increase in serum creatinine relative to the off-clamp patients. Six months or more after surgery, both long-term change and percentage change in eGFR were significantly greater for the on-clamp PN group.

Study limitations included possible selection biases due to varying surgeon experience and patient allocation to treatment. No randomized controlled trials were included in the analysis, so the team encouraged future high-quality studies on the subject.

“Although a small number of papers have compared the two surgical procedures, no paper has discussed their long-term impact on renal function; this topic is particularly important to effectively choose the proper treatment when possible,” Dr Fu and the team wrote. “An increasing number of T1-T2a peripheral renal tumors have been detected at a young age, and an improved outcome is meaningful.”