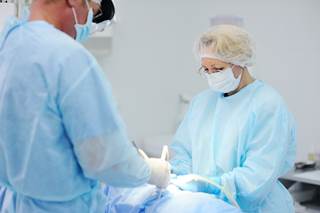 Radical nephrectomy (RN) is associated with reduced kidney function and higher death risk than partial nephrectomy (PN), a new study found. Nephron-sparing, however, does not fully explain the improved survival with PN.

Csaba P. Kovesdy, MD, of the Memphis Veterans Affairs Medical Center in Tennessee, and his colleagues identified 7073 US veterans undergoing nephrectomy from 2004 and 2013 from more than 3.5 million veterans in the Racial and Cardiovascular Risk Anomalies in CKD cohort. Of the study cohort, 4795 patients underwent RN and 2278 underwent PN. At surgery, patients had a stable estimated glomerular filtration rate (eGFR) of 60 mL/min/1.73 m2 or above, based on the Chronic Kidney Disease Epidemiology Collaboration (CKD-EPI) equation.

According to results in published in Nephrology, Dialysis, Transplantation (2018;33:95-101), RN patients experienced twice the rate of eGFR decline than PN patients (21.8 vs 10.3 mL/min/1.73 m2) in the week after surgery. The investigators did not observe a progressive decline in eGFR, as typically seen with CKD. By 180 days or more after surgery, when renal function is believed to stabilize to a degree, a greater proportion of RN patients had eGFR below 60 mL/min/1.73 m2.

In addition, RN patients had 2.2 times greater mortality. Low presurgical eGFR and 180-day eGFR were associated with higher risk for early death, regardless of procedure.

“Our data do not support the hypothesis that the increased mortality in RN patients as compared with PN patients is attributable to the eGFR changes induced by surgery (nephron sparing),” Dr Kovesdy and his coauthors wrote. “The results of our mediation analysis indicate that eGFR 180 days postsurgery accounts for only 32% of the increased risk in mortality seen in RN versus PN patients.”

With regard to study limitations, the team lacked information on important disease characteristics (such as tumor size and stage, and time to recurrence) and cause of death. They urged future research with detailed analyses of cause of death and related comorbidities after nephrectomy.