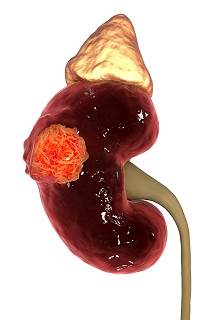 The likelihood of aggressive kidney tumor histology increased along with tumor size, a new study found.

As renal tumor size increases, so does its aggressiveness, according to a new report.

In a study of 2650 patients who underwent radical or partial nephrectomy for solid renal tumors, those with 2 cm, 3 cm, and 4 cm tumors had an estimated 18%, 24%, and 29% likelihood of aggressive histology, respectively, Bimal Bhindi, MD, and colleagues at Mayo Clinic in Rochester, Minnesota, reported online ahead of print in European Urology.

For any given tumor size, men had a greater likelihood of aggressive histology than women.

“These data have important implications for the initial counseling and management of patients with an incidentally detected, radiographically indeterminate renal mass,” the authors stated.

The authors noted that strengths of their study included the use of a large and robust institutional database with long-term follow-up. The study was not without limitations, however. For example, as the study was observational, the investigators could not rule out selection bias. “Patients not represented in the cohort include those electing to undergo active surveillance, those with angiomyolipomas who did not proceed to surgery, poor surgical candidates, and those with metastatic disease who were managed with systemic therapy,” the wrote.

Bhindi B, Thompson RH, Lohse CM, et al. The probability of aggressive versus indolent histology based on renal tumor size: Implications for surveillance and treatment. Eur Urol. 2018 published online ahead of print.