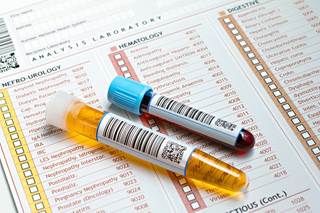 In a pilot study, metabolomic analyses of serum and urine showed a high level of predictive ability.

Metabolic profiles determined by serum and urine analyses may distinguish benign renal masses and renal cell carcinoma (RCC), according to a pilot study. They also may differentiate pT1 from pT3 RCC.

The group of metabolites in serum that differentiated benign masses and RCC varied considerably from those detected in urine, Oluyemi S. Falegan, a PhD candidate at the University of Calgary in Canada, and colleagues reported in Metabolites (2017;7[1] doi: 10.3390/metabo7010006). Still, glycolytic and tricarboxylic acid cycle intermediates and amino acids and their derivatives were the most significant metabolites identified as potentially useful variables, according to the investigators. In serum and urine specimens, pyruvate and lactate differentially increased in RCC versus benign cases, whereas levels of succinate and citrate were reduced. Glutamate levels increased in patients with RCC compared with those who had benign masses in both serum and urine, whereas glutamine was reduced in serum. Falegan's group observed depleted threonine and taurine levels and increased trigonelline, tryptophan, and isoleucine levels in the RCC patients compared with controls. In addition, urinary levels of glycine, creatinine, and phenylalanine decreased in response to cancer development.

These differences in metabolite levels also discriminated between pT1 and pT3 RCC.

The serum and urine GCMS models had area under the curve (AUC) values of 0.93 and 0.98, respectively; the AUC values for the NMR models were 0.83 to 0.98, respectively. “This indicates excellent predictive ability of these metabolomics platforms and shows that they can reliably distinguish between benign and malignant renal masses and identify different stages of RCC.”

The increased glutamine levels in RCC found in the current study corroborates findings in similar studies “and further strengthens the proposition that increased glutamate levels may indicate increased glutaminolysis for biosynthetic purposes in RCC,” the investigators stated. Taken together, this sequence of biological events underscores the role and importance of metabolic remodeling in RCC tumorigenesis, according to the researchers. Thus, therapeutic alternatives that exploit these “biological loopholes” may improve clinical outcomes of patients with RCC.

“These tools can be potentially employed clinically to identify renal neoplastic transformation in asymptomatic individuals,” the researchers concluded.