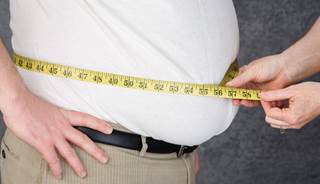 Prediagnosis obesity is a risk factor for overall and individual secondary primary cancers.

HealthDay News — Obesity before a cancer diagnosis is associated with an increased risk for overall and individual secondary primary cancers (SPCs) in males, according to a study published online Oct 10 in the Journal of Clinical Oncology.

Sang Min Park, MD, PhD, from the Seoul National University College of Medicine in South Korea, and colleagues assessed the effects of obesity before the diagnosis of a first cancer on the development of secondary primary cancers in 239,615 Korean male cancer survivors (January 2003 through December 2010).

The researchers found that over 1,614,583 person-years of follow-up, 4,799 patients had SPCs. Among cancer survivors, the age-standardized incidence rate of cancer was 1.1 times higher than that of the general population. Prediagnosis body mass index (BMI) and risk of all-combined, colorectal, liver, lymphoma, biliary tract, kidney, and obesity-related SPCs had positive linear trends. The adjusted hazard ratios for SPCs among severely obese (BMI ≥ 30 kg/m²) cancer survivors were significantly higher than those for first cancers among all cohort participants (1.41 vs 1.12).

"Prediagnosis obesity is a risk factor for overall and individual SPCs, and the strength of the BMI-cancer association is slightly stronger in male cancer survivors than in the general population," the authors write.