Overweight-Related Cancers Common in the US 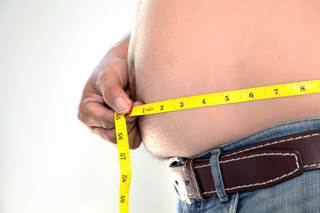 A high BMI and T2D diagnosis may lead to liver disease

(HealthDay News) -- The burden of overweight- and obesity-related cancer is high in the United States, and incidence has increased in some states and age groups, according to a study published online in Morbidity and Mortality Weekly Report.

C. Brooke Steele, DO, from the US Centers for Disease Control and Prevention in Atlanta, and colleagues analyzed data from the United States Cancer Statistics (2005 to 2014) to assess incidence rates and trends for cancers associated with overweight and obesity (adenocarcinoma of the esophagus; cancers of the breast [in postmenopausal women], colon and rectum, endometrium, gallbladder, gastric cardia, kidney, liver, ovary, pancreas, and thyroid; meningioma; and multiple myeloma).

The researchers found that in 2014, approximately 631,000 people received a diagnosis of a cancer associated with overweight and obesity, representing 40% of all cancers diagnosed. Incidence rates for these cancers were higher among older individuals (ages ≥50 years) than younger ones, higher among females than males, and higher among non-Hispanic black and non-Hispanic white adults than other groups. Over the study period, incidence rates for overweight- and obesity-related cancers varied by age, cancer site, and geography. Except for colorectal cancer, incidence rates increased significantly in individuals aged 20 to 74 years but decreased among those aged 75 years or older; incidence rates also increased in 32 states and remained stable in 16 states and the District of Columbia.

"Comprehensive cancer control strategies, including use of evidence-based interventions to promote healthy weight, could help decrease the incidence of these cancers in the United States," conclude the authors.