Odds of Prescribing Drugs Up With Doc Receipt of Payments 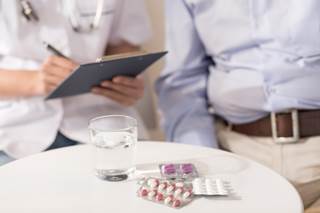 Aaron P. Mitchell, MD, from the University of North Carolina at Chapel Hill, and colleagues examined the correlation between oncologists' receipt of payments from pharmaceutical manufacturers and drug selection in two situations where multiple treatment options exist. The two sets of drugs were sorafenib, sunitinib malate, and pazopanib hydrochloride for metastatic renal cell cancer (mRCC) and dasatinib, imatinib mesylate, and nilotinib hydrochloride monohydrate for chronic myeloid leukemia (CML). Data were included for 354 physicians who prescribed the mRCC drugs and 2225 physicians who prescribed the CML drugs; physicians had at least 20 filled prescriptions among the three drugs in 2014.

"For 3 of the 6 cancer drugs studied, physicians who received general payments were more likely to prescribe the drug marketed by the company that made the payments," the authors write.