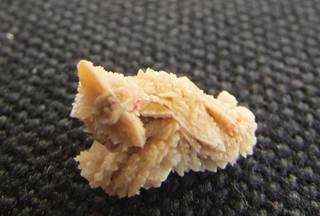 Kidney stones are associated with an increased risk of papillary renal cell carcinoma (RCC) and upper tract urothelial carcinoma (UTUC), according to investigators.

In a study of 120,852 participants in the prospective Netherlands Cohort Study (NLCS), Jeroen A.A. van de Pol, and colleagues at Maastricht University in Maastricht, The Netherlands, found that individuals who reported a history of kidney stones had a significant 39% greater risk of RCC overall compared with those who did not, after adjusting for multiple variables, van de Pol's team reported in the British Journal of Cancer. When the investigators examined the association by RCC type, they found that a history of kidney stones was associated with a significant 3-fold increased risk of papillary RCC (pRCC), but was not significantly associated with clear-cell RCC (ccRCC).

“We hypothesize that the difference in risk between these RCC subtypes may be rather due to differences in metabolism between these cancer subtypes rather than a direct effect from the kidney stones,” van de Pol told Renal & Urology News. “Potentially, these RCC subtypes are affected by a lifestyle that is related to kidney stone formation. In our study, we have taken multiple risk factors into account, such as alcohol usage, hypertension and obesity, but it might be that other factors also affect both the risk of developing a kidney stone and the risk of developing RCC.”

The investigators said the study, to their knowledge, is the first to find an increased pRCC risk among individuals with kidney stones.

Kidney stone history was associated with a significant 1.7-fold increased risk of UTUC. The study found no difference between localization of tumors in the renal pelvis or ureter. “In contrast to the proximal tubule, stone formation is common in the renal pelvis and ureter, which enables kidney stones to cause chronic irritation and inflammation to urethelial cells,” the authors explained. “In turn, this may explain the increased UTUC risk in relation to kidney stones.”

In addition, results showed that younger age at kidney stone diagnosis was a risk factor for RCC overall. A diagnosis of kidney stones among individuals younger than 40 years was associated with a significant 2-fold greater overall risk of RCC compared with those diagnosed later.

The NLCS was a prospective study initiated in 1986 to investigate the association between diet and cancer. At baseline, all participants completed a self-administered questionnaire on diet, medical conditions, and other risk factors for cancer. Of the 4352 subcohort members, 365 (8.4%) had a history of kidney stones and 3987 (91.6%) did not. During 20.3 years of follow-up, 544 RCC cases and 140 UTUC cases developed in the full cohort.

In a previous meta-analysis published in QJM (2015;108:205-212), a team led by Wisit Cheungpasitporn, MD, now with the University of Mississippi Medical Center in Jackson, found that a history of kidney stones was associated with a significant 76% increased of RCC overall. A subgroup analysis, however, revealed that a history of kidney stones increased RCC risk only in men.

Commenting on the new study, Dr Cheungpasitporn noted that one of its major strengths was the available data on the differentiation between histologic subtypes of RCC, which provide novel information that builds on the findings of the meta-analysis by his team. Another strength was the extensive adjustment of hazard ratios for potential confounding factors known to be related to kidney cancer, including age, sex, body mass index, smoking status, and hypertension. “The investigators successfully demonstrated that kidney stones were associated with increased papillary RCC risk, but not ccRCC risk,” Dr Cheungpasitporn said.

“Despite these limitations, the findings from this well-conducted, large population-based study from the Netherlands Cohort Study confirmed the association of kidney stones with kidney cancer that we demonstrated in our previous meta-analysis,” Dr Cheungpasitporn said. “Thus, future studies are required to identify if there is any role in term of public health or early prevention of cancer in patients with kidney stones. Moreover, future studies are required to provide additional insight on the mechanisms underlying this association.”

Kidney cancer and some other cancers tied to obesity are increasing the most rapidly among individuals younger than 50.

First-line treatment of metastatic renal cell carcinoma with tyrosine kinase inhibitors is associated with worse progression-free and overall survival in patients with non-clear-cell vs clear-cell histology.