Surgery May Not Be Most Appropriate Frontline Tx in mRCC 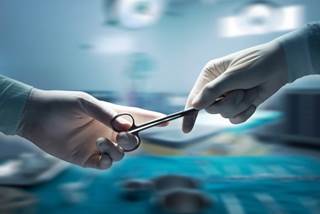 The findings of the SURTIME trial help confirm the results of the CARMENA phase 3 trial, according to investigators.

Pretreating patients with metastatic renal cell carcinoma (mRCC) with sunitinib prior to cytoreductive nephrectomy (CN) led to 28-week progression-free rates (PFRs) that were similar to those seen in patients who underwent immediate CN followed by postsurgical sunitinib, according to the results of the phase 3 SURTIME trial, which were published in JAMA Oncology.1 Although the pretreatment group had longer intention-to-treat (ITT) median overall survival (OS) compared with individuals in the immediate CN group, these same patients were also more likely overall to receive sunitinib therapy.

The trial involved 99 patients in the Netherlands, Belgium, the United Kingdom, and Canada whom had untreated clear cell mRCC. Based on criteria from the Memorial Sloan Kettering Cancer Center (MSKCC), most of the enrollees had intermediate-risk disease. Patients were randomly assigned to receive 3 cycles of sunitinib therapy followed by CN (49 individuals) or immediate CN followed by sunitinib (50 individuals); patients in the deferred surgical group also got sunitinib after surgery if there was no evidence of disease progression.

The 28-week PFR for the ITT population was 43% among patients who were pretreated with sunitinib prior to surgery and 42% among those who received immediate CN. The ITT median OS was 32.4 months in the pretreatment arm compared with 15 months in the immediate CN arm, however in the per-protocol population, the difference in OS between the 2 arms was not statistically significant. Furthermore, 98% of patients in the pretreatment arm received sunitinib, whereas only 80% did in the immediate CN arm.

The findings suggest that pretreating with sunitinib may lead to better or at least similar outcomes for patients with primary mRCC, wrote lead author Axel Bex, MD, PhD, consultant clinical lead, Specialist Centre for Kidney Cancer, Royal Free London NHS Foundation Trust, and honorary senior lecturer, UCL Division of Surgery and Interventional Science, London, UK, in an email to Cancer Therapy Advisor. Nevertheless, the trial was small and underpowered, and it was only able to observe a benefit of deferring CN in terms of ITT median OS as a secondary end point, he added.

It is not clear why patients in the pretreatment arm had improvements in ITT median OS but not ITT PFR, but it may be because progression-free survival, especially beyond the first several months, does not necessarily correlate with extent of progression and death from the disease, Dr Bex said.

The CARMENA trial randomly assigned 450 patients with poor- and intermediate-risk clear cell mRCC to undergo CN followed by sunitinib therapy or receive sunitinib alone. In regard to median OS, an interim analysis revealed that sunitinib alone was noninferior to the standard therapy of surgery followed by sunitinib based on median OS. In Dr Haas' opinion, SURTIME is a better-designed trial, because it focused predominantly on the intermediate-risk group for whom the most appropriate treatment is still unknown.

SURTIME also addresses concerns about whether sunitinib is safe to give before surgery, as it is known to inhibit wound healing and can increase the risk of complications such as cardiac events, Dr Haas said. Patients in the pretreatment arm had surgery the day after stopping sunitinib therapy, and patients in both arms without disease progression received sunitinib 4 weeks after surgery.

A benefit of pretreating with systemic therapy among patients with intermediate-risk disease is that it could identify patients with aggressive disease who do not respond, may have a poor prognosis, and would be less likely to benefit from surgery. “Using a VEGF TKI ahead of surgery is a useful litmus test for who is an appropriate candidate for CN at a later date when they're in this intermediate group,” Dr Haas said.

On the other hand, if immediate CN is the frontline treatment, it could delay systemic therapy, which is critical in patients with aggressive disease, because they are weak after surgery, Dr Bex said.

Researchers are also currently interested in exploring outcomes with immune checkpoint inhibitors (nivolumab and ipilimumab) in the context of CN, noted Dr Bex. The PROSPER RCC trial (ClinicalTrials.gov Identifier: NCT03055013) is under way, which will compare surgery alone with nivolumab prior to CN in patients with localized renal cell carcinoma.

However, it is important to compare these treatments head-to-head in patients with metastatic disease, and there is 1 trial being considered in this population, Dr Haas said. Nevertheless, VEGF TKIs still have an important place in the treatment of mRCC because there is a large group of patients, particularly those with intermediate-risk disease, who respond better to VEGF TKIs than to immune checkpoint inhibitors, she pointed out.

Ultimately, the avoidance of surgery is an important benefit to patients with metastatic cancer.

"In the era of modern drugs, there is no RCT [randomized controlled trial] evidence to suggest that patients [will] have better outcomes with surgery, and the only evidence [that does exist] suggests surgery may be safely avoided," wrote Bishal Gyawali, MD, PhD, Brigham and Women's Hospital, Boston, Massachusetts, in an email to Cancer Therapy Advisor. "The question of when to do a surgery ([which was the focus of] SURTIME) becomes relevant only when we know that surgery is useful."

Disclosure: The SURTIME study was funded by Pfizer. For a full list of disclosures, please refer to the original study.