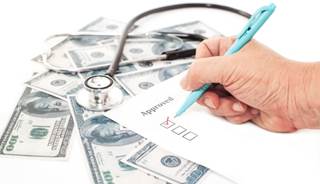 Access to treatment should be considered as important as the research leading to clinical improvements.

A new study adds to the growing body of evidence that insurance status and high out-of-pocket costs can pose serious financial barriers to cancer treatment, limiting access to therapies and, consequently, increasing the potential for negative consequences for overall survival.1

The study by researchers at the University of Pennsylvania and the Fox Chase Cancer Center in Philadelphia focused on 1721 Medicare patients with metastatic renal cell carcinoma (mRCC). It found that almost 40% fewer with high out-of-pocket costs initiated oral therapy compared with those with low out-of-pocket costs.

“This is especially relevant for the treatment of metastatic renal cell carcinoma,” they wrote, because of the discovery of many new, but expensive, oral therapies available to mRCC patients.

“These expanded treatment options have demonstrated reduced toxicity and been shown to extend survival in clinical trials, more than doubling the median overall survival of approximately 1 year conferred by pretargeted era therapies.”

The study compared the treatment initiation rates of Medicare Part D patients who received low-income subsidies (LIS beneficiaries) to their non-LIS counterparts. The difference in out-of-pocket costs was significant: at least $2800 for the initial oral prescription for non-LIS patients, compared with $6.60 or less for subsidized patients.

Barely one 1 of 5 patients with the higher out-of-pocket costs (20.7%) initiated oral therapy, whereas more than a third of the LIS patients did (33.9%). The non-LIS patients, furthermore, demonstrated lower rates in initiating any targeted therapies (26.7% vs 40.4%).

Even when they did initiate treatment, the authors wrote, “non-LIS patients were also slower to access therapy.”

Patients with mRCC are hardly the only patient group affected by treatment costs. In its 2016 report on the State of Cancer Care in America, the American Society of Clinical Oncology (ASCO) stated that “costs associated with cancer care are rising more rapidly than costs in other medical sectors.”2

Cancer drugs, the report stated, “account for seven of the 10 most expensive drugs reimbursed through Medicare Part B.”

For the Medicare Part D program, the Centers for Medicare & Medicaid Services (CMS) paid $1.35 billion for a single cancer drug — lenalidomide — in 2013, “making it one of the 10 most expensive drugs that year despite being used by many fewer beneficiaries than competing drugs on list.”

The impact on patients can be financially devastating, which led a nationwide consortium of physicians to make a public call for lower prices in 2015.3

“For a patient with cancer who needs one cancer drug that costs $120,000 per year, the out-of-pocket expenses could be as high as $25,000 to $30,000 — more than half the average household income and possibly more than the median take-home pay for a year,” they wrote. “Patients with cancer then have to make difficult choices between spending their incomes (and liquidating assets) on potentially lifesaving therapies or foregoing treatment to provide for family necessities (food, housing, education). This decision is even more critical for senior citizens who are more frequently affected by cancers and have lower incomes and limited assets.”

The cost of treatment for patients with RCC imposes its own burdens. A 2014 study of the lifetime costs associated with 2 of the oral therapies currently prescribed, everolimus and axitinib, estimated that monthly drug acquisition costs reached $9174 and $10,558 respectively.4

As the ASCO report, looking at cancer treatment in general, stated, “patients without health insurance are especially vulnerable to high drug costs, but costs can be unaffordable even for those with insurance when high deductibles transfer more of the cost of treatment to the insured. The result is that out-of-pocket drug expenses for patients with health insurance can run $25,000 or more per year.”

Multiple studies have noted that the economic burden frequently leads to patients failing to adhere to treatment regimens.

“The price of many cancer drugs also forces patients and families to make difficult financial choices about whether to forego or curtail needed treatments,” according to the ASCO report. “Some estimates suggest that 10% to 20% of patients with cancer may not take prescribed treatments because of the cost and that they are more likely to declare bankruptcy than those without cancer.”

The result is a frustrating paradox for oncologists: even as a host of new and increasingly effective therapies are becoming available for a variety of cancers, patients are delaying or discontinuing use of those life-saving specialty drugs because of the financial burden, with a direct impact on overall survival.

Chronic myeloid leukemia, for instance, is considered highly treatable, with lifespans of patients adhering strictly to a tyrosine kinase inhibitor regimen similar to someone without cancer.

But missing as few as 3 prescribed doses in a month is associated with significantly worse outcomes, according to the authors of a 2017 study that found a disturbingly high relationship between insurance status and overall survival.5

For patients under 65 years, the authors of that study wrote, “patients who were uninsured or had Medicaid insurance had an approximately 2-fold hazard for death in comparison with patients with other insurance.”

A 2015 analysis of treatment with imatinib concluded unequivocally that “poor adherence to imatinib therapy is the most important factor contributing to cytogenetic relapse and imatinib failure. It is therefore of paramount importance that physicians recognize this problem and work toward improving adherence in chronic myeloid leukemia patients treated with tyrosine kinase inhibitors.” 6

A year before that analysis, a study of chronic myeloid leukemia patients found that cost was one of the primary factors in targeted therapy nonadherence.7

Barriers to receiving treatment, including cost, should therefore be considered as important as the research leading to clinical improvements. The authors of the new mRCC study concluded that “advances have led to increased therapeutic options for many oncology patients, yet these treatments are only beneficial if individuals can access them.”