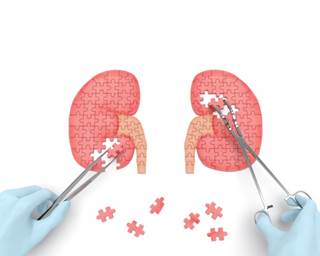 Study of patients with clinical T1a renal cell carcinoma shows that those who undergo renal mass biopsy have only a 1.2% rate of upstaging to pT3a perinephric fat involvement.

“This effect is small and the clinical significance is unknown,” Amirali Salmasi, MD, MS, of the David Geffen School of Medicine at the University of California, Los Angeles, and colleagues concluded in a paper published online ahead of print in Urologic Oncology. “We also acknowledge that this finding, if real, is balanced by the importance of the information acquired from biopsies.”

Tumor seeding along the biopsy tract during RMB is extremely rare, but the possibility of upstaging secondary to capsular violation from RMB has not previously been investigated, according to the authors.

Using the National Cancer Database, Dr Salmasi's team identified 24,548 patients who underwent surgery for clinical T1a renal tumors and met study inclusion criteria. Patients were classified as upstaged if final pathology demonstrated perinephric fat invasion only without vein involvement. Patients with sinus fat involvement were excluded from primary analysis. Pathologic upstaging to pT3a perinephric fat invasion occurred in only 284 patients (1.2%). The rate of upstaging was 1.1% in the no-biopsy group compared with 2.1% among those who underwent RMB, a significant difference between the groups.

Of the 24,548 patients 1827 underwent RMB and 22,721 did not. Both groups had a median age of 59 years at RCC diagnosis. Larger tumor size and care at an academic institution vs a community facility were associated with greater odds of RMB, Dr Salmasi and his colleagues reported.

Salmasi A, Faiena I, Lenis AT, et al. Association between renal mass biopsy and upstaging to perinephric fat involvement in a contemporary cohort of patients with clinical T1a renal cell carcinoma. Urol Oncol. 2018; published online ahead of print.