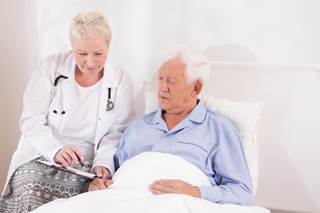 Partial and radical nephrectomy were associated with similar cancer-specific and overall survival in elderly patients.

The study, by researchers at the Johns Hopkins School of Medicine in Baltimore led by Mark W. Ball, MD, included 787 patients aged 65 years and older with solitary cT2-T2 renal masses. Of these, 437 (55.5%) underwent PN and 350 (44.5%) underwent RN. The median follow-up was 36 months. In unadjusted analyses, PN was associated with better cancer-specific survival (CSS) than RN at 5 years (100% vs. 87.5%) and 10 years (100% vs. 80.2%), the researchers reported in Urology (2016; published online ahead of print). PN also was associated with better overall survival (OS) at 5 years (80.2% vs. 65.4%) and 10 years (60.6% vs. 35.1%). In multivariate analysis controlling for patient age, tumor diameter, ASA score, and pathologic stage, PN and RN patients had similar CSS and OS. Perioperative outcomes and complication rates were similar between the treatment groups.

The authors concluded that “age alone should not be a contraindication to nephron-sparing surgery.”