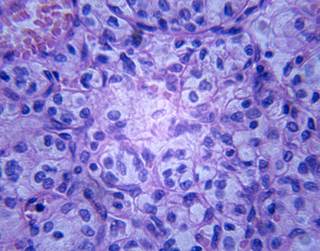 (HealthDay News) — For patients who lack distinguishing clinical characteristics of known hereditary kidney cancer syndromes, panel testing may be useful for identifying hereditary cancer, according to a study published online in Cancer.

Kevin A. Nguyen, from the Yale School of Medicine in New Haven, Conn., and colleagues retrospectively reviewed test results and clinical data from 1235 patients who underwent targeted multigene panel testing of up to 19 genes associated with hereditary kidney cancer. The authors assessed the frequency of positive, inconclusive, and negative results.

The median age at diagnosis was 46 years, which was significantly younger than that of the US population of individuals with kidney cancer. The researchers found that 6.1%, 75.5%, and 18.4% of participants had positive, negative, and inconclusive results, respectively. Folliculin and fumarate hydratase were the most commonly altered genes (altered in 1.8% and 1.3% of patients, respectively). The highest rates of variants of unknown significance were in Tuberous Sclerosis Complex 2, mesenchymal epithelial transition factor proto-oncogene, and PMS1 homolog 2, seen in 2.7%, 2.2%, and 1.7% of patients, respectively. The only factor that was identified as predictive of a positive test on multivariate logistic regression was early age of onset (odds ratio, 0.975), which may be an identifying characteristic of low-penetrant syndromes.

"Panel tests may be particularly useful for patients who lack distinguishing clinical characteristics of known hereditary kidney cancer syndromes," the authors write. "The current results support the use of early age of onset for genetic counseling and/or testing."

Two authors are employees of Ambry Genetics, which provided the authors with the dataset for the study.