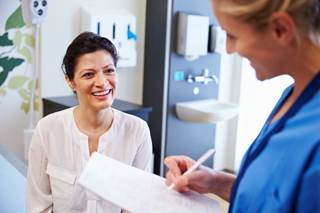 In a study, only 3 of 108 patients experienced complications, all of which were minor and required no hospitalization or further intervention.

“It potentially offers improved dynamic characterization of solid renal mass, greater convenience to patients, as well as cost savings,” a team led by Chirag N. Dave, MD, of the Beaumont Health System in Royal Oak, Michigan, concluded in a paper published online ahead of print in Urology.

Dr Dave and his colleagues studied a retrospective cohort of 108 patients who underwent office-based ultrasound-guided RMB from April 2010 to October 2015. The study population had a median age of 69.5 years; 64.8% of patients were male.

The patients had a median renal mass size of 3.3 cm. Biopsy results showed that 72 patients (66.7%) had renal cell carcinoma, 14 (13%) had benign renal parenchyma, 11 (10.2%) had angiomyolipoma, 2 (1.9%) had lymphoma, and 3 (2.8%) had other disease. Biopsy findings initially were non-diagnostic for 14 (13%) of the 108 patients. The non-diagnostic rate fell to 8 (7.4%) after including patients who were rebiopsied. Twenty-eight patients underwent observation, whereas 79 (73.2%) underwent surgery or ablative therapy. Final pathologic findings was concordant with biopsy results in 64 (98.4%) of 65 cases. Of the 108 patients, 3 (2.9%) experienced a Clavien grade I complication. “All complications were recognized in the 1-hour postprocedure observational period and no patients were admitted to the hospital or required additional intervention related to their biopsy.”

Fellowship-trained urologists with experience in percutaneous renal access and advanced laparoscopic or robotic procedures performed the biopsies. All patients had a suspicious mass revealed on ultrasound, computed tomography, or magnetic resonance imaging. Patients were asked to hold all anticoagulant medications for 1 week prior to biopsy. All patients received an oral narcotic (10 mg hydrocodone) and sedative (diazepam) 1 hour pre-procedure. Clinicians continuously monitored patients for response to verbal commands.

The investigators noted that numerous studies have demonstrated that same-day hospital-based outpatient renal biopsy is safe and is most commonly followed by a 6–8 hour observation period. “At our institution, after reviewing the literature regarding techniques of RMB, we felt that office biopsies for renal masses by urologists were a natural progression, technically feasible, and safe for select patients,” they wrote.

“We plan to study cost comparisons at our private practice and local institution and anticipate similar substantial cost savings,” the authors stated.

Dave CN, Seifman B, Chennamsetty A, et al. Office-based ultrasound-guided renal core biopsy is safe and efficacious in the management of small renal masses. Urology 2016; published online ahead of print.