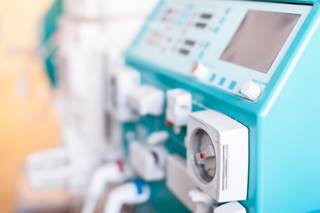 Patients who received hemodialysis 6 times per week instead of 3 showed improvements in biomarkers of mineral metabolism and left ventricular remodeling.

SAN DIEGO—Hemodialysis (HD) 6 vs 3 times per week reduces serum phosphate and improves biomarkers of mineral metabolism and left ventricular remodeling, according to study findings presented at the American Society of Nephrology's Kidney Week 2018.

According to a post hoc analysis, more frequent HD reduced serum phosphate by a median 0.5 and 1.1 mg/dL, in the daily and nocturnal settings, respectively, Christopher T. Chan, MD, of Toronto General Hospital in Canada, and colleagues reported in a poster presentation. The fall in phosphate significantly correlated with 52% and 45% declines in fibroblast growth factor 23 (FGF23) in the daily and nocturnal trials, respectively. It also was associated with 82% and 69% decreases in systolic blood pressure, respectively.