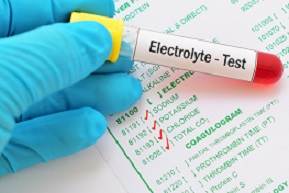 In a study, patiromer lowered serum phosphate in patients with hyperkalemia and hyperphosphatemia.

SAN DIEGO—Patiromer, a potassium-binding polymer approved for treating hyperkalemia, may lower serum phosphate in patients with both hyperkalemia and hyperphosphatemia, investigators reported at the American Society of Nephrology's Kidney Week 2018 conference.

In a post hoc analysis of the 4-week TOURMALINE trial (NCT02694744), 95 patients had baseline serum phosphate levels of 4.8 mg/dL or less and 16 patients had levels exceeding 4.8 mg/dL. All had advanced chronic kidney disease (median estimated glomerular filtration rates were 35 and 18.0 mL/min/1.73m2, respectively). Most patients were white, male, and diabetic. Patients received 8.4 g patiromer once daily to start.

Of the 16 patients with elevated serum phosphate, 11 took patiromer with food and 5 did not. Two patients also continued taking fixed doses of the phosphate binder sevelamer. In these patients, the mean serum phosphate level decreased from 5.3 mg/dL at baseline to 4.7 mg/dL at week 4, David A. Bushinsky, MD, of the University of Rochester Medical Center in New York, and colleagues reported. During that same period, the mean 24-hour creatinine-normalized urine phosphate level decreased from 722.8 to 573.7 mg per 24 hours. The group with normal serum phosphate displayed only minor change.

In addition, mean serum calcium and 24-hour creatinine-normalized urine calcium remained stable from baseline. No one experienced hypercalcemia. Furthermore, magnesium levels decreased slightly in both groups. At baseline and week 4, patients with hyperphosphatemia had higher levels of intact parathyroid hormone (iPTH) and fibroblast growth factor 23 than those with normal phosphate.

As the investigators explained, calcium is released when patiromer binds to potassium in the gastrointestinal tract. Results suggest that some released calcium binds to intestinal phosphate, lowering urine and serum phosphate levels in patients with hyperphosphatemia.

“This study confirms and extends earlier work on the effects on calcium and phosphorus when patiromer is used to treat hyperkalemia in patients with chronic kidney disease,” Dr Bushinsky told Renal & Urology News. “We found that the small amount of calcium that is released when patiromer binds to potassium can bind intestinal phosphorus, lowering urine phosphorus in all patients and serum phosphorus in hyperphosphatemic patients. This finding merits further study, especially in patients with abnormally high levels of blood phosphate.”

The study was funded by Relypsa, which manufactures patiromer (Veltassa®).