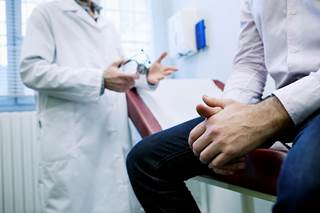 Researchers at the University of Michigan in Ann Arbor have proposed an online calculator to aid patients with localized prostate cancer (PCa) in deciding whether surgery or radiation therapy is their best treatment option, a question that randomized trials have not fully addressed.

“Helping guide men with localized prostate cancer through their initial treatment decision is one of the most important things we do as prostate cancer specialists, study investigator Todd M. Morgan, MD, associate professor of urologic oncology, told Renal & Urology News. “Despite the number of men who have to face these decisions each year, we have very little prospective, randomized data to help steer our recommendations.”

Clinicians now must rely on reams of retrospective, observational data, which are often conflicting and can be inaccurate for a number of reasons. Understanding the limitations of these data, the researchers used sophisticated statistical approaches to focus less on the question of whether surgery or radiation leads to better long-term cancer control in general, but on whether it is possible to identify scenarios where one is more effective than the other.

“There tends to be some inherent differences between patients who undergo surgery and those who undergo radiation, and it can be challenging to account for these differences when comparing mortality rates between treatment modalities,” Dr Morgan said.

The researchers used Bayesian multistate models that jointly consider both clinical failure (CF) and survival and adjust for confounding factors. The models can provide predictions for multiple outcomes simultaneously. The team used data from 4544 patients (mean age 61.2 years) treated at the University of Michigan from January 1996 to July 2013. All patients had detailed information on treatment, patient and tumor characteristics, and outcomes.

Among the 4544 men, 3769 underwent radical prostatectomy (RP) and 775 received external beam radiotherapy. The investigators observed 157 clinical failures (3.5%), 90 deaths after CF (2.0%), and 378 deaths from other causes (8.3%). Dr Morgan's team found no significant difference in CF risk for surgery versus radiotherapy. When the investigators employed multistate models, however, individualized predictions in some cases resulted in different expected outcomes between surgery and radiotherapy for a given patient.

Although the data have limitations, the approach described in this paper has the potential to move the conversation beyond the concept that a single modality of treatment may be generally superior to the other. Clinicians often think of molecular biomarkers as necessary for precision medicine approaches, but the reality is that routine clinical data can be used effectively to help individual patients pick an optimal treatment, he said.

The personalized predictions developed by this team build on a prevalent framework of nomograms for which baseline variables are typically prognostic biomarkers. Soroush Rais-Bahrami, MD, associate professor of urology and radiology at the University of Alabama at Birmingham (UAB) and the director of UAB's Program for Personalized Prostate Cancer Care, said the shared decision-making process used for counseling patients regarding their treatment options for localized PCa is not universally standardized, which makes this a potential area for controversy depending on individual practice patterns.

“A personalized approach to optimized treatment decision-making for patients with prostate cancer seeking definitive treatment will certainly be a major goal moving forward,” Dr Rais-Bahrami said. Additional studies determining specific predictors of cancer treatment success for either RP or radiotherapy, potentially integrating tumor-specific genomic profiling or imaging characteristics, could lead to a more optimized guidance of certain patients to preferentially seek one treatment option over another.

Ultimately, the goal is to have a personalized treatment algorithm that is more systematic and can be more universally adopted for guiding treatment decision-making. David Y.T. Chen, MD, director of the Urologic Oncology Fellowship Program and a professor of surgical oncology at Fox Chase Cancer Center-Temple Health, Rockledge, Pennsylvania, said current nomograms tend to be fairly generic, and they have never been able to distinguish which patients would have better cancer control with surgery or radiotherapy.

“This study starts to give you a differential direction,” Dr Chen said. “There has been no benchmark to answer the question. The study can't be done because there are emotional reasons why men won't have surgery.  It can't be a blinded study.”

Adopting the online calculator or a similar approach now brings precision medicine closer to reality for men with localized disease. However, Dr Chen said this particular model focuses on cancer control, and this is not the whole story. Functional issues must be considered.

The new study captures an additional level of cancer components, he said, but it does not incorporate other aspects, including whether men have benign prostatic hyperplasia and urine leakage to start with, and such parameters prior to treatment tend to affect their decision,” Dr Chen said.