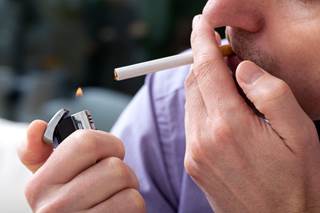 Fewer prostate cancer deaths may be yet another benefit of smoking cessation.

Decreases in prostate cancer (PCa) mortality may be a beneficial effect of a decline in the prevalence of cigarette smoking, new research suggests.

Investigators led by Miranda R. Jones, PhD, of Johns Hopkins Bloomberg School of Public Health in Baltimore, examined PCa mortality rates among men aged 35 years or older in relationship to cigarette smoking from 1999 to 2010. They focused on 4 states with high, intermediate, and low rates of cigarette smoking to discover trends in different populations. Data on smoking prevalence were obtained from the Behavioral Risk Factor Surveillance System and mortality rates from the Centers for Disease Control and Prevention's Wide-Ranging Online Data for Epidemiologic Research.

By comparison, deaths from external causes such as accidents, remained relatively stable in 3 states and increased in Kentucky over the time period.

Current cigarette smoking, rather than past or cumulative smoking, is a risk factor for PCa development, progression, and death, the researchers explained. Men were classified as current smokers if they reported smoking at least 100 cigarettes in their lifetime and continued to smoke at least occasionally. In 2014, the Surgeon General listed PCa among smoking-related diseases.

Neither screening with the prostate-specific antigen test nor PCa treatment advances fully accounted for the decline in PCa mortality, the investigators determined.

These findings support population-wide reductions in smoking as a potential strategy to reduce the number of PCa deaths, Dr Jones and colleagues concluded.

As the study was observational, the investigators could not account for relevant risk factors such as PCa pathology, obesity, and physical inactivity, nor could they assess possible protective factors, such as statin use.

Is "Fusion" Technology Heralding the "Anatomic" Age for Prostate ....