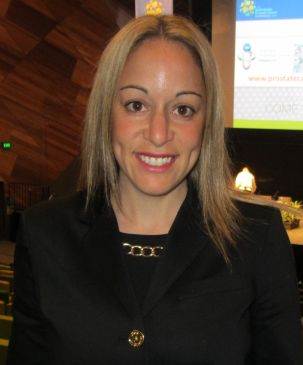 MRI of the prostate prior to a biopsy of the gland improves prostate cancer detection, but insurers resist paying for it.

These are very exciting times in prostate imaging, with a rapidly expanding body of literature on prostate magnetic resonance imaging (MRI) (Figure). Correspondingly, studies also show increasing use of prostate MRI prior to prostate biopsy in the U.S.  In a 5% sample of Medicare beneficiaries from 2010-2015, Rosenkrantz et al. evaluated the receipt of any pelvic MRI within 6 months prior to biopsy with a prostate indication diagnosis code.1 They found that pre-biopsy MRI use increased from 0.1% in 2010 to 0.7%, 1.2%, 2.9%, 4.7%, and 10.3% in 2011, 2012, 2013, 2014, and 2015, respectively. However, there was significant variation by age (fewer in younger men within the Medicare population), race (fewer in African American men) and region (greatest uptake in the Northeast). In 10 states, less than 1% of patients received pre-biopsy MRI during the final year of the study. 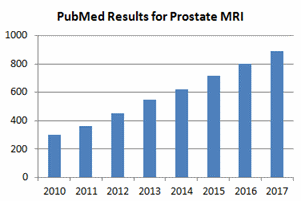 Another study by Liu et al. examined US MarketScan® commercial claims data on prostate biopsies performed from 2009 to 2015.2 Overall, there was a 20-fold relative increase in the proportion of men who had any code for MRI or MRI-guidance for biopsy within 3 months before the biopsy date (0.2% in 2009 to 6.5% in 2015). By 2015, nearly 5% of biopsy-naïve and 20% of repeat biopsy patients had pre-biopsy MRI.  Notably, use of pre-biopsy MRI clustered around early adopters (e.g., medical centers in New York, Los Angeles, and Bethesda, Maryland).

These studies using different data sources provide corroborative evidence that the use of MRI prior to prostate biopsy has been steadily increasing over time. However, in both studies, there was significant variability in uptake of prostate MRI based on geographic and demographic factors. Ultimately, these data show that MRI was still used in the minority of cases as of 2016, particularly in the biopsy-naive population.

In April 2016, the American Urological Association and Society of Abdominal Radiology issued a Joint Consensus Statement describing the ongoing need for strategies to select patients for repeat biopsy.3 They state that when high-quality prostate MRI is available, it should be strongly considered in any patient with a prior negative biopsy who has persistent clinical suspicion for prostate cancer (PCa) and who is undergoing a repeat biopsy.

There is also growing evidence supporting a role for MRI prior to initial prostate biopsy.  PROMIS (PROstate MRI Imaging Study), a prospective, multicenter study, examined the diagnostic accuracy of multiparametric MRI (mpMRI) and transurethral ultrasound (TRUS) biopsy compared with the reference standard of template mapping biopsy in men with a PSA level below 15 ng/mL and no prior biopsy.4 They found that mpMRI was more sensitive (93% vs 48%) and less specific (41% vs 96%) than TRUS biopsy for the detection of clinically significant cancer. The authors concluded that using MRI prior to prostate biopsy could reduce overdiagnosis of insignificant cancer and improve detection of clinically significant cancer.