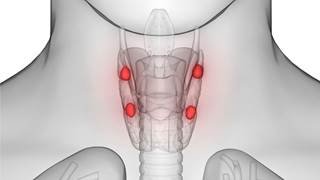 Parathyroid gland volume more than halved in patients treated with cinacalcet for 8 years.

Long-term treatment with the calcimimetic cinacalcet can reduce the need for parathyroidectomy for up to 8 years, according to findings from a new study published in Nephron.

Investigators led by Masaaki Inaba, MD, PhD, of Osaka City University in Japan, measured total parathyroid gland volume and mineral metabolism biomarkers in 23 Japanese hemodialysis patients with secondary hyperparathyroidism who were treated with cinacalcet for 8 years. Following initiation of the drug, mean levels of intact parathyroid hormone (iPTH), serum phosphate, and serum calcium decreased significantly. The investigators reported that iPTH fell from 657 pg/mL at baseline to 190 pg/mL at 6 months and 109 pg/mL at 8 years. Serum corrected calcium declined from 10.0 to 9.6 mg/dL at 6 months, then rebounded slightly to 9.7 mg/dL at 8 years. Serum phosphate decreased progressively from 6.5 to 5.7 mg/dL at 6 months and 5.2 mg/dL at 8 years.

Total volume of the parathyroid glands assessed by ultrasound decreased from 1272 mm3 at baseline to 796 mm3 at 6 months to 332 mm3 at year 8. Decreases in gland volume correlated significantly with cinacalcet use.

Long-term use of cinacalcet did not lead to hypoparathyroidism. Mean doses of cinacalcet were similar at 6 months and 8 years: 35.9 and 34.2 mg/day, respectively. Patients also required significantly lower doses of phosphate binders over time (5071 to 4859 to 3511 mg/day at the 3 time points, respectively).

“These results suggest that cinacalcet treatment may postpone the need for parathyroidectomy and/or reduce its use even after long-term administration for up to 8 years,” Dr Inaba and colleagues concluded.