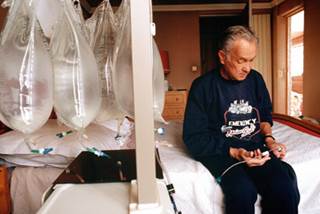 Findings from a small study suggest that patients on peritoneal dialysis who have hungry bone syndrome respond better to treatment than those on hemodialysis.

Hungry bone syndrome following parathyroidectomy resolves more easily among patients on peritoneal dialysis (PD) than those on hemodialysis (HD), according to a new study.

Changying Xing, MD, and colleagues of The First Affiliated Hospital of Nanjing Medical University in China, compared data from 29 PD and 169 HD patients who underwent successful total parathyroidectomy (PTx) with autotransplantation. Significantly fewer PD than HD patients suffered post-operative hungry bone syndrome (76% vs 93%), according to results published in International Urology and Nephrology. All patients had their levels of corrected serum calcium raised to normal range within 48 hours after surgery. Yet PD patients required significantly smaller doses (74 vs 121 mmol), lower total doses (503 vs 811 mmol), and shorter durations (54 vs 72 h) of intravenous calcium supplements than HD patients.

Results showed that serum intact parathyroid hormone (iPTH) and alkaline phosphatase (ALP) levels were minimally different between the groups, indicating similar bone resorption. Serum potassium levels before (3.91 vs 5.16 mmol/L) and after (4.11 vs 4.74 mmol/L) PTx were significantly lower in PD compared with HD patients. No PD patients had hyperkalemia 3 days after surgery compared with 33% of HD patients.

On multivariable analysis, the PD modality itself emerged as the most influential factor in easing hungry bone syndrome.

This is the first study to investigate differences in hypocalcemia after PTx in PD and HD patients. “Efforts should be devoted to individual perioperative management for PD patients undergoing PTx,” according to the study authors.